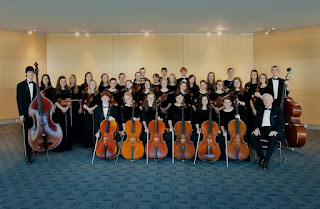 The YOUNG ARTIST CHAMBER PLAYERS, a group of talented high-school string players from the Salt Lake City area, will be performing in Cedar City. They will appear in concert on Saturday, March 17, at 3:00 p.m. at St. Jude’s Episcopal Church, 70 North 200 West. Included in the concert will be “Concerto in C for Two Violins and Two Cellos” by Vivaldi, “Chanson Triste” by Liadov, and Hohvaness’ “Armenian Rhapsody”. The group will also be collaborating with the Suzuki Strings, of Cedar City, on a movement of Bach’s Brandenburg Concerto #3.

Concert admission is free and the public is welcome.

The Young Artist Chamber Players (YACP) was founded by Jack Ashton in 1985. Jack is a member of the Utah Symphony, and recently retired from teaching at Olympus High School. He wanted to give excellent string players along the Wasatch Front a chance to participate in a quality chamber orchestra. In 1988 the orchestra was incorporated and a Board of Directors appointed.

Through the years, the YACP has enjoyed many wonderful playing opportunities. In addition to their regular concerts, the orchestra has been invited to perform as part of the Governor’s concert series, in the Lobby fest at the Utah Symphony, Side-by-Side concerts with the Utah Symphony and in concerts with Pro Musica and Jubilate. For the past nine years YACP has performed with Utah recording artists Marshall McDonald and Steve Nelson in a Christmas concert/fund-raiser for the Utah Food Bank. The most recent concert was attended by over 1000 people. They also make an annual bus tour to perform at venues in Utah or Idaho.

Membership in YACP has become so popular that it has grown into a family of four string orchestras with members from elementary through high school. YACP remains the highest achievement for these young players, who must audition for a place in the orchestra.

The Young Artist Chamber Players are supported by grants from the Utah Arts Council; the National Endowment for the Arts; the Salt Lake County Zoo, Arts, and Parks Program; and many volunteers.

The Suzuki Strings are under the auspices of the SUU Music Department. They will play Lightly Row and Habanera on the concert as well as the joint piece with the Young Artists.

For more information on the Cedar City concert, contact Sara Penny at 586-2286.

By amybird0019 November 20, 2019
Thank you to everyone who attended and made this year's workshop possible!  The students enjoyed working with the guest clinicians and the concert was beautiful.  We look forward to seeing everyone again next year. Photos taken by Jeff Richards. Fall 2019 Workshop students, clinicians and teachers Our wonderful clinicians! The Shining Stars! Pre-Twinkers! The Marcato Class The Stringendo Class
1 comment
Read more

By Suzuki Strings Cedar City August 16, 2019
We are thrilled to announce our annual workshop!  This year we have clinicians from around Utah.  Please join us for this wonderful musical opportunity!  Workshop is included for group class participants. There is a workshop only option (click below).  Teachers are welcome at no cost.  Workshop registration is online: Workshop Only Registration The workshop begins on Friday (11/1) at the Heritage Theater in Cedar City.  Hours are: Friday 3:30 to 7:00 pm.  Saturday 9 am to 2:00 pm with a 5:00 concert (Call time is 4:30).  Lunch is provided for all participants on Saturday.   (The Storybook Parade is at 2:00 on Saturday afternoon.)   Payments are accepted under the "Payments" tab on the blog site through PayPal.  You can also send a check written to "Suzuki Strings"  c/o Amy Gold, 12 N. Cove Drive, Cedar City, UT  84720.   Peter Romney started cello at the age of five, and grew up studying under, among others, Carol Tarr, Ri
Post a Comment
Read more

By amybird0019 July 16, 2019
This summer has been spectacularly fun as we had students from around the area join us for Jubilee Fiddle Camp!  We played our way down Main Street in Cedar City on a sunny 4th of July morning.  Thanks to all who participated!  Thank you to Sara Penny for some great photos!
3 comments
Read more